I almost forgot about them ...

From now on you can also download the Logos conjugator which is available in various languages. For further info please refer to the Logos website.
- March 23, 2008 No comments:

Well, we had a look on where would be the best place to publish the manual. One of the possibilities was Floss Manuals. So I had a talk with Adam Hyde and he created the section for the manual for us. This means that during the next days you will find what is already present from that manual there.
- March 20, 2008 No comments:

I got my first Easter Egg from a colleague and I would like to say to Urs Wolffers: thank you Urs, you made my day :-)

Why? Well he asked if I knew something about a CAT-Tool which did not work well with him and I did not know about it. So I had a look and downloaded Anaphraseus and tried it out. I had some minor problems, because having a new tool and trying to do immediately "all you need" is not really the best way to start off with.

I am really happy that I found that tool because it solves at least two really relevant issues I had with OmegaT and one of these issues is only covered by Anaphraseus as much as I know.

ISO 639-3 support: yes, Anaphraseus supports ISO 639-3 language tags for its translation memories and that is really something special. Ahhh ... you are a programmer and say that it is quite easy to implement, well: maybe it is easy, but it is probably not interesting enough since I have been asking for it being implemented for approximately one and half a year. Now I have it and I don't need to fake to translate to whatever language anymore, but I can insert for example "EN" for the source language and "NAP" for the target language. THAT IS INDEED SOMETHING!

The second issue I always had was proofreading. I am working with a person who knows Neapolitan well for proof reading, but he is NOT a translator and therefore does not know CAT-Tools. I tried to give him the OmegaT TMX files for proofreading, but for some reason his Operating System mixed up the codes and I got a corrupted TM back. We could not figure out why this happened. So another time I copied and pasted the whole of the TMX file into a .doc document, but even that was somewhat troublesome. The solution in the end was to export the translation and send him the source and target files and then, when they came back, I had to copy and paste the changed sentences back into my project to have the translation memory with the changes. I believe you can imagine that this was quite time consuming.

Now with Anaprhaseus I have a Trados-like or Wordfast-like segmentation and even if it is not the nicest layout (a bilingual table would be the best one, but one cannot have all :-) it will save me loads of time and therefore I will be able to create more contents in Neapolitan. I mean considering how many people do actually write in Neapolitan this makes a really huge difference.

Here is an example of how such a segmented text looks like (this one is without proof reading – I just did some sentences to show you how it looks like):

The glossary function is like with OmegaT: you have to work on it manually, so anyway there is no difference for me.

I did a complete translation of the first chapter of a book for my daughter from German to Italian (which I sent this evening to a colleague for proof reading) and I did it all with Anaprhaseus. Everything worked fine. The few issues which I had were solved quite fast and the reason for them was mainly me not knowing what to do and Ubuntu behaving a bit different then expected. But now: everything works fine from the very beginning to the clean-up at the end. There is already a short manual by Dmitri Gabinski, but it is for now not available online. I will let you know as soon as it is.

Thanks to Oleg Tsygany for the work already done and to Oleg and Dimitri for the time they took to answer all my questions.

A quote ... but really funny

Ladin Wikipedia on the incubator

A week ago I received the following post (in German):

Actually Andi asks me if I can help with recruiting people who help with the Ladin Wikipedia which is still on the incubator. Well, I am on one hand part of the LangCom and I am not sure if I should do this ... but on the other hand I am the CCO of Vox Humanitatis which actively promotes less resourced languages and the related projects. Well, Wikipedias in these languages are projects to be promoted and helped. Therefore I would like to ask anyone who is reading this to help to connect me/us to people speaking/writing Ladin so that I can connect them with the right people from my side. I am also going to write a number of associations that maybe can help. (E-Mail: s.cretella [at] voxhumanitatis.org).

Please note that we will actively support your help requests, but please consider that we only have a certain amount of time, so whatever needs to be done is going to be done even often it will take some days until we actually can move. Our to-do list is quite long :-)

Thanks for helping to spread the word!

Actually I wanted to write this blog some 10 days ago, but like so often things just get crazy around you and time just gets too short ... but maybe it is good that there is some time in between, just to make people aware of it again.

Approx. two weeks ago there were some people who IMHO did not behave correctly. I mean: by blogging and by being connected to various organizations we also have a certain responsibility. What we need to be aware of is that often a simple statement, sometimes maybe joking around with friends, can be misunderstood and lead to really ... ehm ... not so nice results. 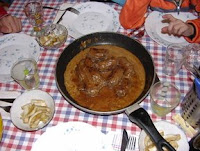 There is one strange thing that lately happens to me and I am wondering why that is. Up to some time ago I mainly cooked Neapolitan style, that is the way I learnt to cook when I came to the Amalfi Coast. Then you simply could not find many ingredients, but anyway: I had never learnt to cook how my mom and my grandma did. The strange thing is that it is some time now that I am considering my original language, the one spoken in Rodach, that is Mainfränkisch (well, a dialect of it). And its some weeks now that I am changing way to cook ... without even knowing what I do, I mean it is automatic. And the taste, well my family confirms this, is exactly the same the things my mom and my grandma cooked. Well yes, I saw my grandma hundreds of times doing things and in the past I already did some stuff I learnt from her like marmelades, peas in glasses (don't really know how you call this in English - well: vegetables that are treated to be there in winter when you don't have other stuff). 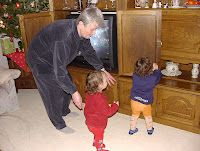 Now I am wondering why I am changing my way of doing things. Yes, I am changing myself, that's true as well, but: is it the dealing with that language that brings things back? Or could the reason be another one: it's almost two years now that I saw my mom for the last time - well this Saturday it is two years now. Now: there's nobody around anymore who can cook that stuff in my family. Do I automatically do it? Or maybe is it a combination of both, my mom not being here anymore and the language?
- March 06, 2008 No comments:

it was really difficult to get a ticket for one of the concerts in Ravello ... today it seems as if they were an everyday mass product: 84 concerts in one season starting on 1st of March ... don't know when they will stop, but let's say the end of October. This means 8 month, that is approx. 240 days ... this means approx. each third day a concert ... uhmmmmmm .... and they had difficulties to get the message out last year (at least as much as I understood).

Now when it comes to tourism marketing in that town they work with elite guests. But 84 concerts is not "elite production" but "mass production". This simply doesn't match. You can have the best artists for the whole of the year, but this concept simply cannot work with high level customers. They want the extraordinary, they want stuff nobody can easily have. That's why they are the elite. They can afford to pay high prices and they don't care about paying as long as they get premium service. Premium services are rare and not mass products. I mean 84 concerts like these in a city like Las Vegas (yes, I know what I talk about, I was there even if only for two days and over 25 years ago) can work, but not in such a small tourism centre on the Amalfi Coast in Italy .... I am really wondering how this season will work out for them ... in the end: or they will have to change their program for the future or they will need to change their tourism ... and in the worst case: they will loose both and that would be really sad. 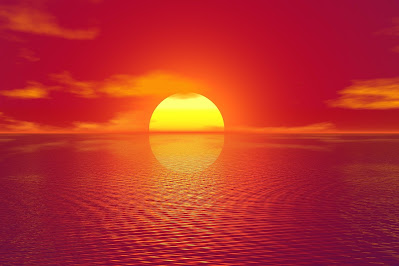